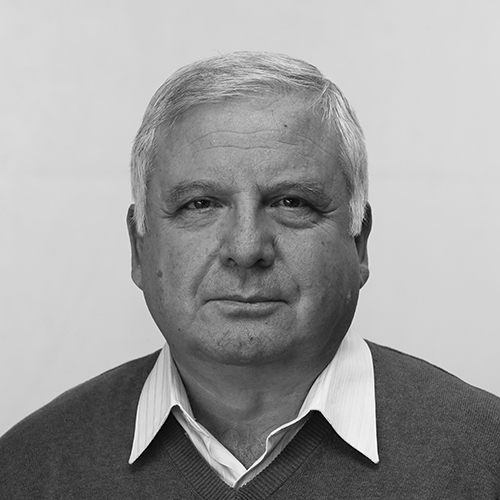 D emographic processes are influenced by both short-term and long-term factors. Short-term factors and their impact are often "obvious", but perceptions based only on them are often misleading. If the difference in fertility and mortality rates (natural growth) or the difference in the number of people arriving and leaving the country (migration balance) increases or decreases for two or three years in a row, then it does not follow that in the long term we will have positive or negative population dynamics. Considering a sufficiently long period, for example 10-20 years or more, it may turn out that a short-term increase or decrease in the number of births is due, for example, to the characteristics of the age and sex structure of the population.

Within the framework of demographic science, factors influencing demographic processes, including natural population growth and migration balance, have long been studied in detail. The problem lies in the specific and appropriate application of scientific provisions to a specific country. Natural growth and migration in a particular country is influenced by many socio-economic, socio-psychological and sociocultural factors. A systematic solution to the problem is complicated by the fact that these factors have an impact not only directly, but also indirectly, have both a differentiated and a complex interaction effect. Consideration of these phenomena often significantly transforms the conclusions regarding the state and trends of the demographic situation, obtained on the basis of superficial observations.

On the other hand, the demographic processes in the country are also influenced by external - regional or global factors that are not controlled by this state. This is especially important to take into account when considering countries with a small territory, population, resources, low level of physical, economic, social and cultural protection. When external factors affecting the demography in a country are much more powerful than internal ones, they become decisive.

External factors can be both favorable and unfavorable. Consequently, small countries that display rational and appropriate adaptability can, in specific cases, use powerful external factors to their advantage. Although, they can make mistakes and face irreversible negative consequences, which can even contain risks of the collapse of society and the state.

Therefore, for an adequate understanding of the demographic situation in Armenia, its tendencies, as well as the factors that determine these tendencies, it is necessary to consider as long a period as possible, to use a systematic approach, within which the state and characteristics of the external environment should be taken into account.

The article graphically presents the process of population change in the territory of the modern Republic of Armenia in 1827-2018, periodization of this process is made, a brief description of each time period is given, with an emphasis on the inflow and outflow of the population.

(For the full version of the study in Armenian, see here and here.) 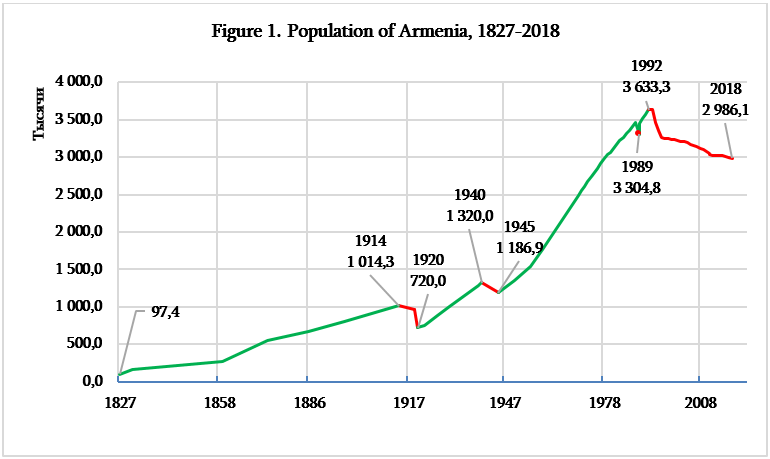 Let's consider these stages separately. However, first about why in 1827 only 97.4 thousand people lived on the territory of present-day Armenia?

During the entire period of the influx of Armenians into the Russian Empire, the state provided all immigrants free of charge with land, food, financial support and building materials for housing. It should be noted that in the years 1831-1873, the population of the Erivan province increased mainly due to natural growth.

The Armenians who immigrated to the Russian Empire were settled not only in Eastern Armenia, but also in other regions of Transcaucasia, as a result of which, in 1913, about 22% or 1,628,000 of the 7,400,000 population of Transcaucasia were Armenians. In general, in 1827-1913, over 86 years, the population of Armenia grew by about 10.3 times, while the Armenian population - by 22 times. The average annual growth was 11%.

After the First World War, when Armenia found itself outside the Greater Russian Space, the population of Armenia decreased due to the Armenian-Turkish and Armenian-Azerbaijani wars. To save themselves from wars, hunger and epidemics, the indigenous population of Eastern Armenia and the Armenian immigrants from the Ottoman Empire who found refuge here began to emigrate en masse. The main flow was to Russia - to the North Caucasus, to the Stavropol and Krasnodar regions, the Don steppes and to the Ukraine. In 1914-1920 the total population in the territory of modern Armenia decreased by 280,100 people. On average, the rate of decline was 4.7% annually.

From November 29, 1920, Armenia again found itself in the Greater Russian Space, first as a republic patronized by the Russian Soviet Federative Socialist Republic; from December 30, 1922 to 1936, as a member of the Transcaucasian Federation within the USSR; and from 1936 as а Soviet Socialist Republic.

The physical safety of the population and the country was ensured. During these years, the same socio-economic policy was pursued in Armenia as in the USSR. In a short time, the health care system was formed and began to develop intensively. In particular the sanitary-epidemiological subsystem and children's health care were developing. The sanitary and hygienic education of the population began. As a result, mortality dropped sharply, which, given the high birth rate, contributed to intensive natural population growth.

Accelerated industrialization of the economy was carried out in Armenia in accordance with the socialist ideology. In the USSR, the socio-economic and cultural inequality between developed and underdeveloped territories and republics, city and village, titular nations and national minorities was decreasing. The level of people's well-being was rapidly increasing.

Soviet Armenia pursued an effective policy of repatriation of Diaspora Armenians. The most important components of the success of this policy were the physical security of the homeland, the building of a fair society, the elimination of the exploitation of workers, and the establishment of peace and friendship among nations. An important factor in the rapid economic and cultural development of Armenia was the repatriation of the Armenian intellectuals with European education.

In the context of such serious losses, it should be noted that in 1942 Turkey increased its army to about 1,000,000 soldiers, of which 750,000 or 50 divisions were concentrated on the Soviet-Turkish border, with 26 divisions on the border with Armenia. Turkey was going to invade Armenia in the event of the defeat of the Soviet troops in the Battle of Stalingrad.

This would mean the genocide of Armenians already in Soviet (Eastern) Armenia.[4]

In 1946-1948 large-scale repatriation of Armenians resumed not only from the countries of the Middle East - Iran, Turkey, Syria, Lebanon, Iraq, Palestine, Egypt, but also from the socialist countries of Europe - Bulgaria, Romania, as well as from the capitalist countries - Greece, Cyprus, Great Britain, France and USA. Over these years, about 100,000 Armenians have returned to Armenia.

The earthquake killed more than 25,000 people, approximately the same number became disabled or injured, and 514,000 people left homeless. About 120,000 people were evacuated from the disaster area. 1/3 of the republic's industrial potential was destroyed.[5]

According to the 1979 All-Union Population Census, 475,000 Armenians lived in Azerbaijan, including the Nagorno-Karabakh Autonomous Region. In response to the peaceful Karabakh movement to secede from the Azerbaijan USSR within the framework of the current Constitution of the USSR, which began on February 20, 1988, Azerbaijan just a week later - on February 27, responded with state-organized mass violence, killings and deportation of Armenians in Sumqayit, and then throughout the territory of Azerbaijan.

Since 1992, when the Great Russian Space once again disintegrated, all processes in Armenia, including demographic ones, took place under the dominant influence of global factors.

As a result of the Spitak earthquake, the transition to a market economy, the blockade of Armenia by Turkey and Azerbaijan, and the Karabakh war, an intensive outflow of the population from the republic began (Figure 2). During 1992-2018, about 1,070,000 people left Armenia irrevocably.

Natural population growth also declined rapidly (Figure 3), which was due not only to the aforementioned difficult social and economic conditions, but also to the gradual introduction of the values of a consumer society into Armenian society, which competed in the minds of young people and gradually replaced the traditional value system.

W hen considering the change in the population of Armenia over the last 200 years of Armenian history, it becomes obvious that these processes were primarily influenced by three main factors. In the context of strategies for improving the demographic situation in Armenia, these factors can be formulated in the form of answers to three fundamental questions.

First, which civilizational and/or geopolitical Great Space is most favorable for Armenia?

An adequate answer to this question ensures the physical safety of the Armenian people.

Armenia is located at the intersection of Great Civilizational and Geopolitical Spaces. On the one hand, the uncertainty of Armenia's civilizational and geopolitical choice creates a constant threat of war, and on the other hand, it acts as a fundamental barrier to economic development. Threats to physical security and low levels of well-being are among the most powerful push factors for migration, i.e. maximally contribute to the outflow of the population from the country.

Second question: what value system exists and is favorable for the Armenian society?

An adequate answer to this question determines the degree of a person's need to have children (how many children does he/she want to have). The countries guided by the concepts of "development theories" are in a very difficult demographic situation. In most of these countries it is customary for a family to have only one child. The child-free lifestyle is gradually becoming fashionable.

The third question: within the framework of what ideology does the state, economy and society of Armenia develop?

An adequate answer to this question guarantees the well-being of the Armenian people, which contributes to a fuller provision of the natural need of people to have children.

It is obvious that the formulated three questions are also fundamental for the overall development of Armenia.

[2] The official data of the State Statistical Committee of the Republic of Armenia for 1992 and 2018 are presented.