One of the most important achievements of 2019 was the agreement reached on the Comprehensive and Enhanced Partnership Agreement (CEPA) implementation Roadmap at the second Partnership Council Meeting between Armenia and the European Union (June 13, 2019). The Roadmap can be viewed as a strategic document for strengthening bilateral cooperation, which is a practical guide to bring the implementation of the Declaration and General Legal Provisions of agreement into life. Due to the Roadmap, the effective part of the agreement is 100% applicable. European side welcomed the implementation of CEPA, noting that all the operations are carried out according to the schedule.

It’s worth mentioning, that the ratification process of the agreement is quite dynamic[1]. 23 EU members have already ratified it and in other five countries the process has begun. Despite the occasional criticism, that the process is delayed, one must take into account the factors affecting the process, internal procedure for the ratification process in EU Member States, the issues on the European agenda (Brexit, election of EU leaders, social complaints in various EU member states) which indirectly affect the process rates. To have a complete idea, let’s note, that for instance in case of Georgia and Moldova, the ratification of Association Agreements by the EU lasted 2 years, and in case of Ukraine it lasted 3.5 years. It’s already 2 years since the signing of agreement between Armenia and the EU and it’s already been ratified by the overwhelming majority of EU Member States.

T he reforms implemented by the Armenian authorities continue to receive support by the EU. It has repeatedly been mentioned in the statements following bilateral meetings by EU officials. In this regard, the latest message published by the Delegation of the European Union to Armenia, which followed the second EU-Armenia Partnership Council meeting held in Brussels on December 16 should be emphasized. Brussels is particularly pleased with the progress made so far by Armenia in implementing the reform agenda, especially on new judicial and anti-corruption strategies. It was recorded by the EU senior leadership, that the European Union is ready to continue providing financial and advisory assistance to Armenia to push forward the ongoing reforms in the country. In this context, it is also noteworthy the reference to the Declaration of the 11th Annual Assembly of the Eastern Partnership Civil Society Forum on the importance of large-scale reform of the judiciary in Armenia. The increase in the volumes of financial support provided by the EU to Armenia also shows the effectiveness of the EU-Armenia cooperation.

The EU provided over 160 million euros of assistance to Armenia for the years between 2017-2020. It’s also noteworthy, that in 2019, the EU increased its annual funding to Armenia by 40 euros, which is an obvious political support. Moreover, “by assessing Armenia’s commitment to pursuing the reform agenda and effectively implementing the CEPA”, EU provided Armenia with another 25 mil. euros under the “Annual Action Plan”

Liberalization of the Visa Regime

T he liberalization of the visa regime for the citizens of Armenia is also on the EU-Armenia agenda. After the meeting with the Prime Minister of Armenia Nikol Pashinyan on March 5, 2019, Jean-Claude Juncker, the President of the European Commission mentioned: “The technical conditions have already been met and now it is the time to work with all Member States on this issue, so that we can move forward freely”.

This shows that the EU leadership sees no obstacles for launching a dialogue. To get started, it is required just the positive opinion of the European Commission and the consent of the EU Member States. The Armenian Government officials have always referred to the importance of launching a dialogue on the liberalization process during their year-long visits to EU countries, as a result of which some European countries have already given their support. It’s should be noted, that the EU countries became more sensitive to this issue because of the not so good experience of the three Eastern Partnership countries and because of the migration crisis. Hence, it’s important that the works done with the EU in this regard shouldn’t be affected by the problems and challenges aroused as a result of visa liberalization of other Eastern Partnership countries and shouldn’t be viewed in that context[2], as it is important to take into account the peculiarities of each country when bringing the process back to life.

Nikol Pashinyan’s meeting with the President of the European Commission Jean-Claude Juncker in Brussels.

In this regard, it should be emphasized that towards the dialogue on the visa regime liberalization, the number of citizens seeking asylum from EU countries decreased in 2019. Particularly, 2,670 RA citizens applied for asylum in the EU countries in January-September, 2019. This figure decreased by 1100 or 29% compared to the same period last year. Over the 9 months in 2019, the number of RA citizens involved in ongoing asylum requests also decreased from 10,320 to 8,930.

There is also a positive result in the readmission process. Below are listed 2018 and 2019 January-December numbers of readmission requests from the EU and the amount of positive responses. 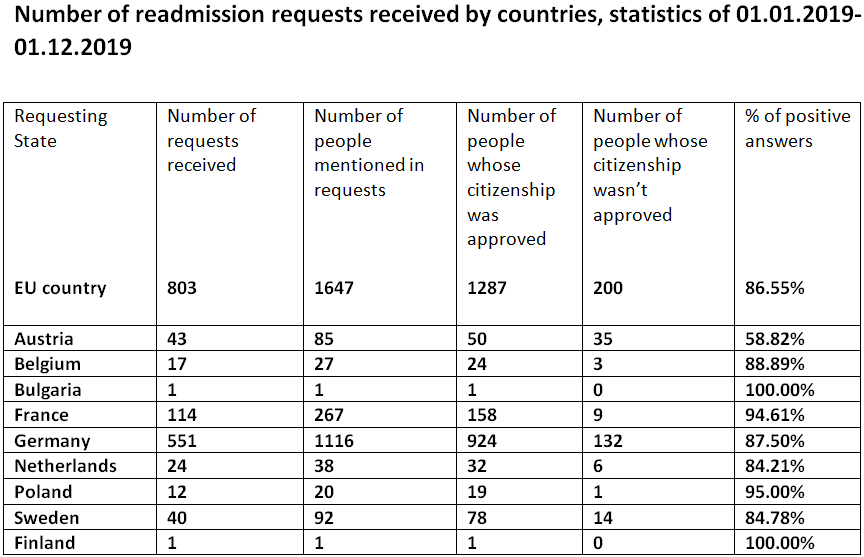 2 019 was also marked by the decade of the EU Eastern Partnership Program. In this regard, discussions on summarizing and evaluating EaP activity’s ten years, as well as discussions on project continuity in both the EaP and in a number of European countries. It should be emphasized, that the discussions on the future of EaP program are on the agenda at this stage. The action plan specified in the document “20 Deliverables for 2020” adopted in 2017 with the EaP countries will end in 2020 and the EU Executive Board should develop a new Joint Action Plan with EaP partners. Armenia, as an EaP member country, should be as productive as possible in the development of this program, to be engaged in a sustainable dialogue with both the new staff of the European Commission and the EaP countries. It’s also important, that the EU will set the specifics of each country and the progress made in democracy in the base of the agenda with EaP countries.

2 019 was important from the point of view of the European Parliament elections and the formation of European Commission’s new staff. It’s also noteworthy the appointment of the new EU Ambassador to Armenia during the year. All these may give a new impetus to the relationships and contribute to the intensification of negotiations on the issues of EU-Armenia agenda. After the European Parliament elections, there are also great expectations from Armenia-EU inter-parliamentary cooperation within the framework of already existing Armenia-EU Parliamentary Committee.

2019 was a good year for the development of Armenia-EU relations. There is a willingness between the sides to promote cooperation at an accelerated pace, which is especially evident due to the deepening of cooperation in different fields. This positive tendency should be maintained and a new impetus should be given to the cooperation.

[1] In 2019, the agreement was ratified by EU 15 members: Great Britain, Belgium, Sweden, Finland, Slovakia, Slovenia, Czech, Hungary, Croatia, Romania, Germany, Cyprus, Ireland, the Netherlands and France. The agreement was also ratified by the Italian Senate and now it’s up to the House of Representatives to complete the process.

[2] If during the launch of the dialogue the numbers of illegal migration from Moldova, Georgia and Ukraine were respectively 4495, 5245, 12835, than in the year of signing the Agreement it reached 8755, 5705, 33795, which shows that the figures for Moldova and Ukraine have almost doubled, while in Georgia the overall dynamics of the figures have been preserved.