One of the most important components of a national energy policy is the use of renewable sources with an aim at reducing dependence on the external energy market. With this in mind, the development of renewable energy potential and the production of appropriate technologies is also paramount in sustaining energy internally.

Turkish experts and the officials responsible for the energy policy have repeatedly emphasized the importance of renewable energy sources (RES) given that the bulk of the primary energy consumed in Turkey is imported. In other words, Turkey is still dependent on the external energy market, therefore due to RES development within the country, Turkey is trying to at least reduce this dependency.

For the last decade, Turkey has paid attention to the RES usage, the development of infrastructures and technologies, as well as to the increase in investments in this area. The renewable energy sources (water resources, biofuels and waste, geothermal, solar and wind energy) are actively used to produce electricity in Turkey(see graphics 1, 2). 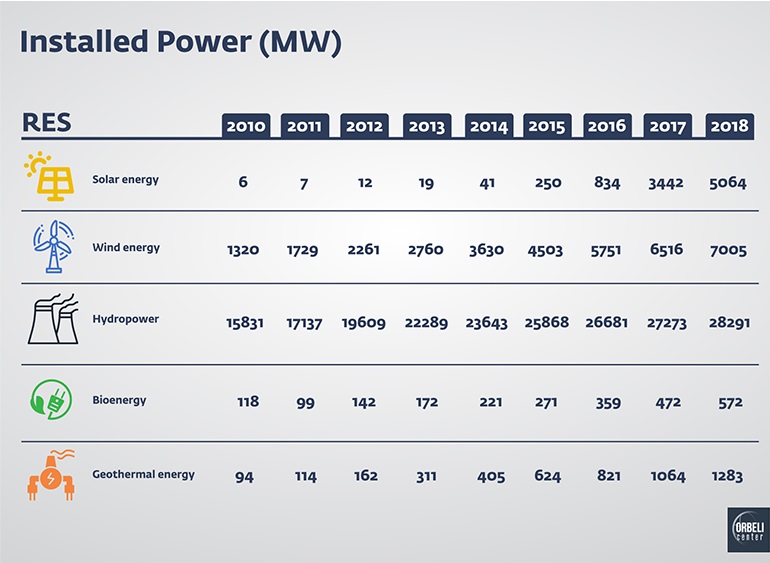 The Main Sources for Renewable Energy

T he law on RES in Turkey was adopted in 2005 and later was amended. A number of normative legal acts regulating the renewable energy field were also adopted. According to Article 11 of the law, the main energy sources in Turkey are: 1. geothermal energy, 2. wind energy, 3. solar energy, 4. hydropower resources, 5. bioenergy (biomass), 6. biogas (including household wastes), and 8.wave energy [1].

T urkey’s geothermal energy potential is quite high. 78% of the resources are located in Western Anatolia, 9% in Central Anatolia, 7% in the Marmara Region, 5% in Western Armenia and 1% in other areas. These resources are in turn applied in agriculture, health, electricity generation and in many other fields.[2]

Turkey is in 4th place among the countries having the maximum geothermal energy potential after the US followed by Indonesia and the Philippines. In 2018, approximately $2,2 billion was invested in the geothermal energy sector with the goal of producing electricity and providing 94 thousand new jobs [3].

Currently there are 48 geothermal power plants producing electricity (with an installed power capacity of 1303 MW). Most of them are built in Marmara and the Aegean regions. According to the “Energy atlas” website Turkey is expected to increase the quantity of power plants by 18 in the coming years. [4]

The geothermal industry is expensive, this is due to site exploration and drilling works therefore the risk for investors increases cost. To reduce the risks, the European Bank for Reconstruction and Development, the World Bank and the International Finance Corporation (IFC) provide Turkey with loans for investments.[5]

T he first wind power plant in Turkey was built in 1998, in the district of Izmir (with 1.5 MW capacity). Between 1998-2005, there were no significant developments in renewable energy field. According to the law on Renewable energy, which entered into force in 2005 progress has been recorded with technology.

According to the report published by Turkeys Wind Energy Association (TÜREB) in 2019 the wind energy installed power capacity was 8.7 MW in 1998, it reached 7615 MW in 2019. With these results Turkey occupies the 11 place as of January, 2019.

According to this same report, there are currently 183 wind power plants in Turkey, in which 3.155 wind turbines are deployed (it is envisaged to create another 17).

A ccording to the Solar Energy Potential Atlas of the Ministry of Energy and Natural Resources, it is possible to get an average of 2741 hours annually from solar energy. This equates to 7,5 hours daily. [7] Until 2015, there was no significant progress in the solar energy field, moreover, between 2006-2010, the government reduced the production volumes made from solar energy production by 2.4%. [8]

Since 2015, Turkey’s private sector has also begun to invest in this field. If in 2014 the installed power was 41 MW, in 2019 it was 5528 MW. According to the state statistics, the quantity of solar power plants is about 6.430, which are located mainly in southeastern Anatolia and in the Mediterranean areas.

In Turkey, solar energy is mainly used in home heating systems, manufacturing, in the field of transport operation (for instance metro), in public offices and for outdoor lightning.

Although the potential of solar energy is more than the other renewable energy sources, it still falls behind wind energy by its installed power, as the latter doesn’t require large expenses. There are also a number of obstacles in the solar energy field such as the high cost for technologies, the lack of qualified specialists, state tax policy, which hinders the development of the field. In addition, investors benefit 7-8 years after the exploitation. [9]

Although between 2010-2019 Turkey made a $19 billion investment in RES (including hydro energy), renewable energy production level is still low. Numerous factors, such as expenses, the gaps and shortcomings of legal regulations, insufficient infrastructures, unformed market conditions, technological issues and many other factors impact negatively on the full use of RES.[10]