On some of the Issues of Expertise Centers in Turkey

The development and significance of the expertise-analytical centers in the public and political life of Turkey, particularly in the foreign relations and in the issues relating economy and security coincided with the important regional and geostrategic changes, which formed new challenges and opportunities for Turkey.

As a result, different layers of society and state-political circles touch upon the security, foreign policy, educational, health and other issues, which became the main axis of study of the expertise-analytical centers. It is not accidental, that the centers specialized in international relations are now more than the centers studying other areas. Although, as they are research centers related to various political trends (or currents), they express their personal ideas and vision.

Though the first “Think Tanks” in Turkey were founded in the 60es of the last century, the field quickly rose during the years of Governance of “Justice and Development” party. More than 80 research organizations have been formed in the last decade, and the total number exceeds 200.  The overwhelming majority of this organizations act in the private sector, the other part acts in the university-academic and governmental sector and the smallest part acts close to the political parties. Let us present the scientific-analytical organizations, the intellectual “product” and the way of action of which is to support the leading “Justice and Development” political party. 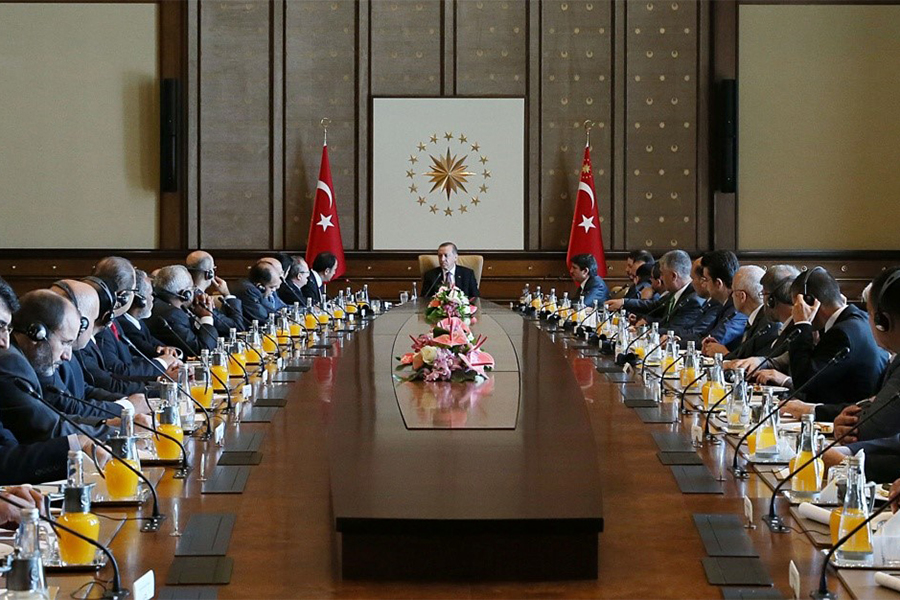 Erdogan’s meeting with the representatives of the expertise centers from Middle East’s 17 countries. Organized by SDE.

Institute of Strategic Thinking (Stratejik Düşünce Enstitüsü-SDE-www.sde.org.tr) was founded in 2009, in Ankara. It is quasi-government [1], conservative center. From 2010-2014, Yassine Aktien, foreign relations ex-leader of the “Justice and Development” party, was the honored president of the Institute. The Institute considers itself as a Think Tank center of “New Turkey”, where domestic and foreign policy, media, financial-economic, defense and security alternative strategies are being developed. There is also an academy (SDE Akademi) within the Institute, which puts the main emphasis of educational functions on the formation of a new analytical society. Educational programs coincide with the research directions of the Institute and are only for students.

Foundation for Political, Economic and Public Research (Siyaset, Ekonomi ve Toplum Araştırmalar Vakfı-SETA- www.setav.org).  It was founded in 2006, based on the Ankara Center for Political Research, by Ibrahim Kalin, the spokesperson to the Turkish President Erdogan. The center’s headquarter is in Ankara, and it has branches in Washington (SETADC www.setadc.org ) and in Berlin. It is a quasi-government Think Tank of conservative orientation. It studies political, economic and social issues to provide recommendations to state bodies. In recent years, issues on media, science, education, human rights, Turkish diaspora, security and defense are in the focus of the center’s research.

Turkish Asian Center for Strategic Studies (Türk Asya Stratejik Araştırmalar Merkezi-TASAM-www.tasam.org ). It was founded in 2003, in Istanbul, by Suleyman Sensoy, specialist of International Relations. It has a branch in Ankara. This is a quasi-government, moderate nationalist center having pan-Turkic accents. The Center is guided and is given intellectual, organizational support on the issues of the Turkish foreign policy by the Turkish Ministry of Foreign Affairs and by other departmental structures.

It realizes the projects “Vision 2023” and “Turkey 2053” under the sponsorship and support of the Turkish President. These are the future-oriented projects for strategically important areas which are carried out under the slogan “Competent country-Global Player”.

The 1st project aims to evaluate the systemic risks, possible development scenarios and carry out macropredictions on agriculture, including its sub-branches with the involvement of wide range of professionals [2]. The 2nd project relates to the international relations of Turkey, its economy, nuclear energy and nuclear technologies, logistics and transportation issues, social security, military industry and other sub-structures of great importance [3]. It should be stated, that responsible government agencies take active participation in this processes. 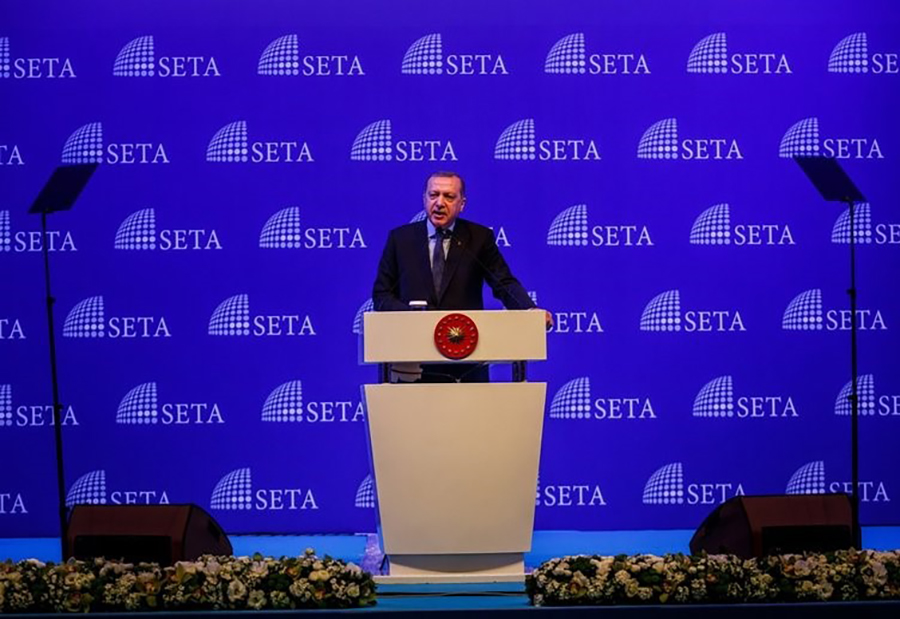 Foreign relations of Turkey are also in the focus of this Center. Annual forums (Turkey-Europe, Turkey- Latin America and Caribbean countries, Turkey-USA, Turkey-China, Turkey-Iran) are organized with the participation of international experts and politicians from different countries within the frames of “Strategic dialogue” project [4].

Scientific-analytical researches are carried out for integrating Turkish-speaking diaspora and for estimating their cooperation opportunities in different levels. It can be concluded, that this is a unique center, which develops ideas and strategies of cooperation between the Turkic world [5].

Sustainable funding is important for the vital function of the Think Tanks, which is formed from various sources. As we have already mentioned, quasi-government Think Tanks are in close relationships with the state system, but are not officially involved in the structure of the Government and are only funded from the state grants.

Financing sources of the above mentioned 3 centers are not transparent, although it is a well-known fact that expertise centers which stand close to the authorities or just share their political views are particularly funded in the form of state grants and donations. For instance, 75% of the Strategic Thinking Institute’s income comes from project revenues, the other part from the board of trustees’ contributions [6]. 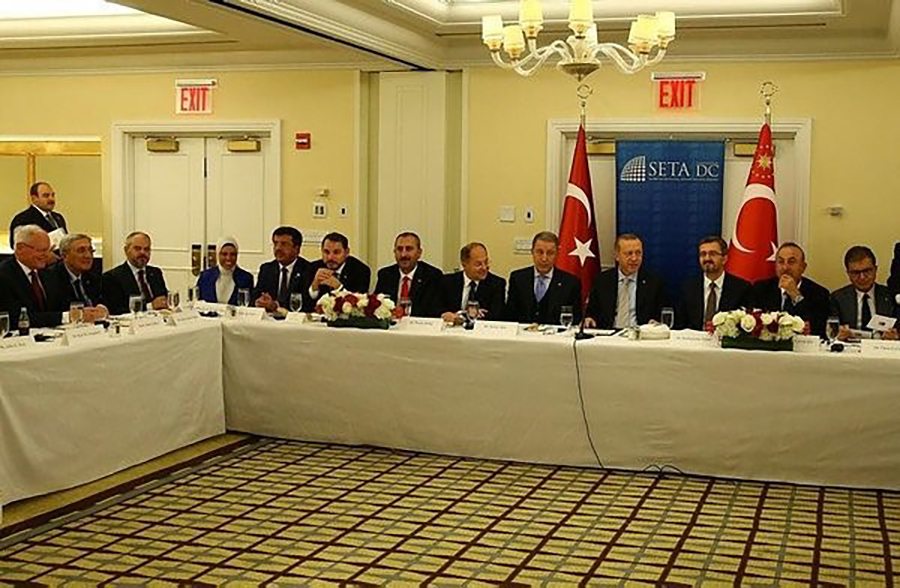 Meeting with SETA experts in Washington

F oundation for Political, Economic and Social research is funded not only by the state grants, but also from other sources, especially from private entrepreneurs who protect and support JDP’s economic policy. According to Nuh Yilmaz, executive of SETA’s Washington office, they are funded by businessman, who are in trade with the Balkans and Middle East countries [7].

Turkish Asian Center for Strategic Studies receives financial aid from banks and from public administration, with whom it conducts events and research projects, from local scientific-educational institutions, from industrial and other institutions. Financial sources are often combined (state and non-state). Although these tree centers have experience in cooperation with the leading research foundations and non-governmental organizations outside Turkey, they are against financing them, which can restrict independence and “academic” freedom.

These centers make predictions in different aspects, provide advice to various state groups and take part in the development of strategic concepts and laws. It should be stated, that being closely connected to the JDP and to various governmental authorities, the centers also have a “close” part.

Following Turkish Foreign policy vectors and priorities, these centers cooperate with the Balkans, Central Asia and Middle East Think-Tanks. SETA and SDE are involved in the “Think-Tank cooperation” project implemented by the government program, which is conducted by Turks Abroad governmental body coordinating the activity of Turkish diaspora and the Associated Societies state department [8]. TASAM also conducts some steps in this direction with the support of Turkish Foreign Affairs Ministry. For years forums have being organized with expertise specters of Islamic Cooperation Organization’s member states, which are devoted to the public diplomacy capabilities, social-economic relations, security issues and Islamic world challenges [9].

As a conclusion, the following Think tanks not being close to any political party or departmental structure, but being involved in foreign policy processing, conduct beneficial activity due to their expertise work. At the same time these new opportunities are used in state governmental bodies for providing their cadres with positions.

[1] Quasi-government are those Think Tanks, which are not officially included in the governmental structure, but are exclusively funded from the state grants. V. Atoyan, Typology Issues of Think Tanks in the Discourse of Political Sciences, http://www.noravank.am/img/detail.php?ELEMENT_ID=15483

[5] Simavoryan, A., Turkey and the Cooperation of Turkic Speaking Countries, http://noravank.am/arm/articles/detail.php?ELEMENT_ID=16909&sphrase_id=69831