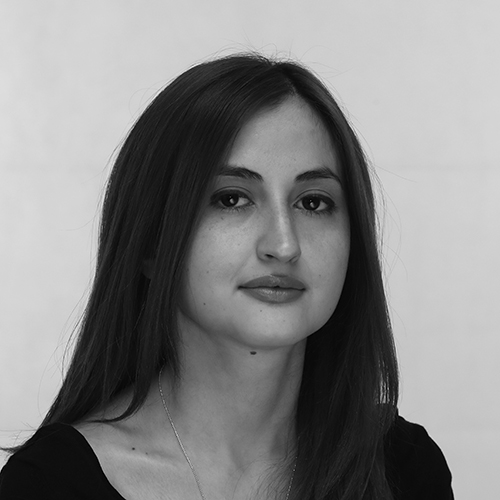 What will cryptocurrency give to Armenia?

The usage of cryptocurrency has been widely spread in line with digital technology development. Armenia has been taking steps towards getting involved in the crypto market. Although there are negative developments in the market business communities worry that the “financial bubble” has already been formed into a cryptocurrency market, and it will sooner or later burst.

C ryptocurrency is a digital or virtual currency, the creation and management of which is based on cryptography methods that is money coding. Cryptocurrency is only electronic, which means, that by obtaining it a person receives a numeral code. It has a conditional exchange rate in the financial and trade markets. The peculiarities of cryptocurrency are anonymity, decentralization and security. The exchange of cryptocurrency is peer-to-peer, without interference of a third person. Regardless of their financial and social positions, participants have equal dealing opportunities.

Central to this virtual money is the decentralization of database, the BlockChain, which means that the numeral codes of cryptocurrencies are distributed throughout computer bases (mining companies) all over the world. Theoretically, anyone who has sufficient means and resources can establish a mining farm. The word “BlockChain” already shows its function: “Block” meaning store and “chain” meaning bind, tie. It means the chain of stores, between which succession is strictly kept. The block contains transactions and contract data presented in the cryptographic form. All the blocks are chained and linked. One should take into account the data of the previous blocks when creating a new one. Initially, the BlockChain was created on the BitCoin (the official date of birth of the cryptocurrency is 2009, when BitCoin network was launched).

The father of cryptocurrency is Satoshi Nakamoto, not much is known about him personally. The term cryptocurrency was first used in a Forbes article about BitCoin in 2011. The goal of creating a cryptocurrency has not yet been fully understood, although some experts consider the necessity of anonymous transfers with high security a reason for its creation.

One of the peculiarities of the system is that Nakamoto placed 21 million as the maximum limit for BitCoin. The most common way of purchasing cryptocurrency is mining. Cryptocurrency mining shouldn’t be compared with the common money printing, as it has only a handful of features, the most important of which is that anyone can engage in mining. Mining originates from the English word mine (mine extraction). Mining network supporting processes is related to which store is opened or closed in the blockchain using the computer’s operation. In other words, minting is the process of purchasing cryptocurrency with a specific software’s power use. Cryptocurrency purchasers are called miners.

Cryptocurrency differs from the official state currency because it can also have an electronic form fiat currency. When talking about “currency” each of us thinks of a banknote. Fiat currency is a standard and controlled currency, such as euro or dollar.

M any economists and entrepreneurs discuss the risks of the “Cryptocurrency bubble” in the crypto market. Generally, a “financial bubble” is formed in the economy when a price for a particular item rises far above the item’s real value as a result of demand. The emergence of a “bubble” is the result of cryptocurrencies not including any value, and that they are a major consumers of electricity and have a speculative role.

Cryptocurrency’s value: Value is a relative concept. Gold is valuable, as it is a rare, hard to extract and a durable metal. Paper money, in fact, has no value, but the fact is that as it is issued by the State it seems secure from the society’s viewpoint.

Nobel Prize winner Robert Shiller pointed out, that unlike gold and other assets, the value of BitCoin is formed as a result of society’s interest. In other words, cryptocurrency is an asset, which is not issued by any country, it is not provided with any valuable metal and its price is formed through the market mechanism based on supply and demand.

Expandable electricity: Cryptocurrency mining requires a great volume of electricity. According to Christine Lagarde, managing director of the International Monetary Fund (IMF), mining farms spend too much electricity, which can have a negative effect on the environment.

Bitcoin Energy Consumption Index shows the average volume of electricity consumption for BitCoin production per annum, expressed by TW/h (TW/h=1*106MW/h). According to this index, the volume of electricity consumed for BitCoin mining has considerably grown during the year. Especially, from the end of July to mid-November of 2018 when it reached its peak, after which it dropped down in January 2019, amounting 47 TW/h per annum.

BitCoin mining demands much more electricity, than it is produced and consumed in a number of countries. According to the data of International Energy Agency, Peru, Honk Kong and Iraq are among the countries which electricity consumption is more than anticipated, and while Singapore, Portugal and Uzbekistan are also too close to the maximum desired electricity volume used for mining. 63% of electricity in Czech Republic is used for BitCoin mining, as a result of which small and large businesses promote payments by cryptocurrency with BitCoin being used in more than 80 companies in the country.

Despite the high cost of electricity, transactions done by cryptocurrencies are quite fascinating, as they are anonymous and have no control over the crypto market by the Central Bank. As a result, cryptocurrency can become a legalization tool for shadow economy’s money turnover and for other illegal means.

CipherTrace group has been doing the research on cryptocurrency studying 45 million transactions at the top 20 cryptocurrency exchanges. CipherTrace found out, that from 2000-2018, 2.5 Billion worth BitCoin transactions were completed.  The results of the study shows, that the transfers done through BitCoin by suspicious people are 36 times greater than in countries, with little or no legislative regulations on money laundering. According to the report, the hackers “have stolen” BitCoin worth 927 million dollars for the first three quarters of 2018. CipherTrace considers these transfers as criminal activity if the mining transfers are to be considered on dark market websites, money extortion through deception, ransom and financial attacks.

Speculative character: Investor George Soros has mentioned that Bitcoin cannot function as an actual currency because of its volatility and also because its rate cannot be changed by 25% in a day. For Soros, cryptocurrencies are of speculative in nature.  Robert Shiller stated, that BitCoin will likely “totally collapse” and the situation around the cryptocurrency reminds him of “tulip mania” in the Netherlands, when the major part of economy resources were directed to the development of only one part of economy.

There is a non-explicit “financial bubble” already in the crypto market, of which the changes in cryptomarket have indicated. The formation of the “financial bubble” started in 2010, when the initial price for one BitCoin was 0.1 US dollars. Since 2010, activity has been noticed, when one of the stock exchanges permitted to exchange BitCoin into real money. Later on this currency attracted illegal trade user’s attention. Due to the rise in demands, BitCoin price reached about 1100 US dollars in November 2013, when more than 1 million transactions were done. However, in 2015, BitCoin rate dropped down 200 US dollars, but later it was restored exceeding the previous level. In December 2017, it exceeded the rate in November 2013, more than 20 times. 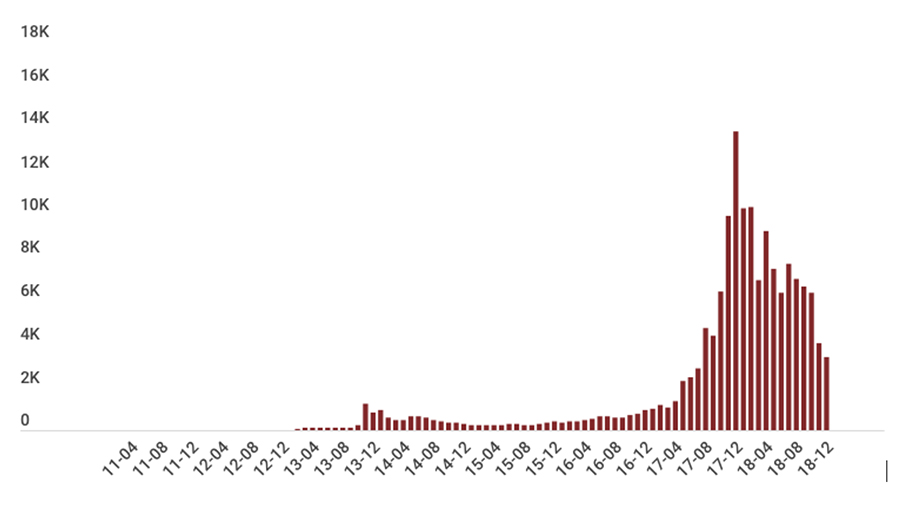 As a result of the November 2018 falling price in cryptocurrency market, the profits of mining farms in China also fell down by shutting down the number of mining farm operations. The shutdown of operations can be attributed to the expense of electricity traffic, which is not made up from mining profits. Two Swedish BitCoin miners abandoned their operations due to the same reason.

BitCoin’s influence on other cryptocurrency is the result of its major share in the cryptomarket. According to investing.com data from 08.12.2018 there are more than 2500 types of cryptocurrencies. Market capitalization in mid-January of 2019 was 121 billion, 417 million US dollars, and the volume indicator which shows the volume of transactions in a day during a given period of time was 16 billion 461 million US dollars. Within 2500 types of cryptocurrencies 52% of capitalization and 32% of transactions belongs to BitCoin. BitCoin’s rate drop has its influence on all the market. 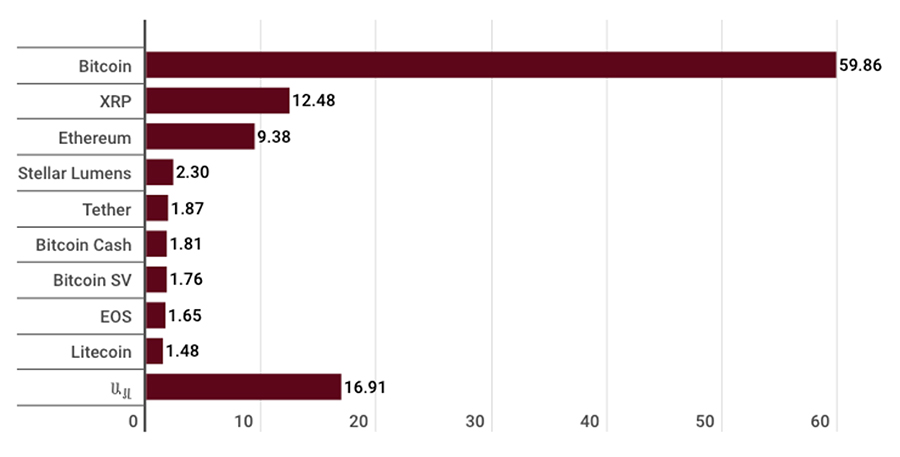 Cryptocurrency types share in cryptomarket capitalization in the beginning of 2019, % 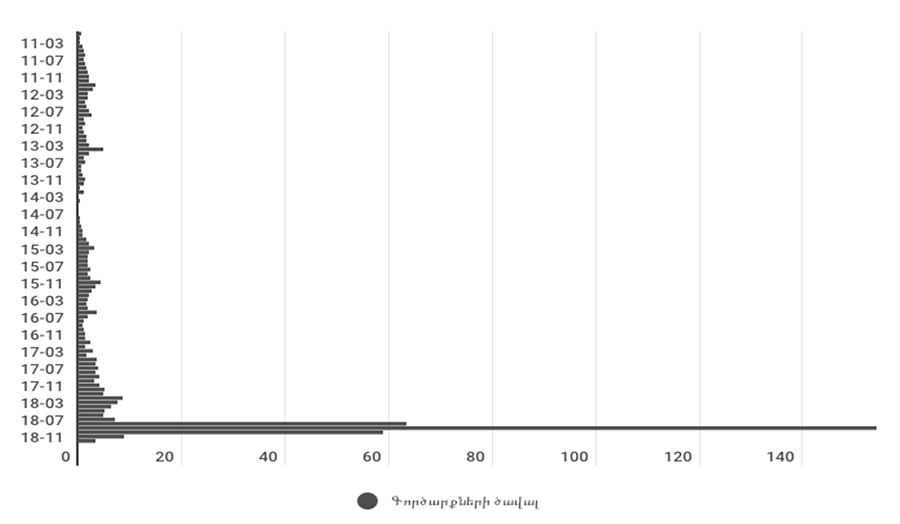 Transactions volume in BitCoin according to the months 2010-2018, mill. US dollar

I n the beginning of May 2018 the Central Bank of Armenia warned about the possible risks of cryptocurrency pointing out that “cryptocurrencies” are deprived of security and are extremely fluctuating. There are no legality around people in charge of most of their actions and transactions. Transactions in “cryptocurrencies” can become a part of money turnover, terrorism, financing schemes, as they are anonymous have no cross-border transactions with nothing guaranteed.

Recently, the Central Bank of Armenia informed, that the Armenian legislation doesn’t authorize Central Bank to give mining companies licenses. The Central Bank also urged people and financial institutions to keep away from the transfers, investments, purchases and other transactions done through “cryptoactives”.

Finally, the negative tendencies in cryptomarket prove that there are some risks for Armenia to step into the cryptomarket.