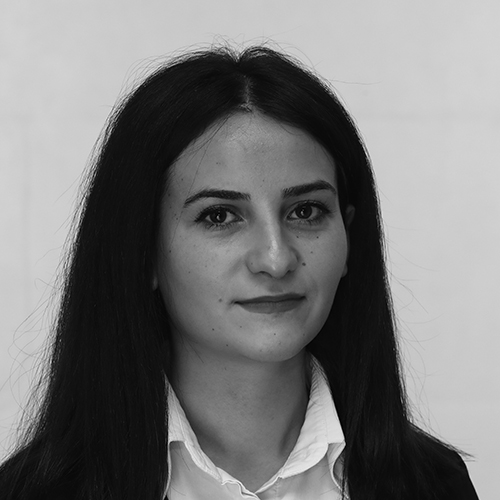 T he need to restructure the Armenian economy has prompted a shift in understanding  that growth should be based on surplus value. When studying the economy of the Republic of Armenia its becomes clear, that mainly non-export sectors (construction, services and so on) record an active growth. Whereas the key to a competitive economy is the development of export. This trend has recently somewhat been neutralized by the growth in the manufacturing industry. This has been accompanied by a decline in the mining industry.

Not underestimating the importance of other economic sectors, it should be emphasized that mining is still significant for Armenia’s economy particularly, the main part of the foreign direct investment (FDI). This investment is directed to the mining industry, providing jobs and helps solving social problems with its ability to sustain a decent salary.

Mining should be observed within the whole production chain, from raw material extraction to recycling and creating additional value. According to statistics, in 2018, the share of mining (mining industry and open pit exploitation) in the GDP made up 2.8% or 166 bil AMD, with mining’s overall volume decreasing by about 14%. For instance, in Canada the share of mining in within the GDP is about 6% and in Georgia it doesn’t reach 1%. Armenia is among the first 25 countries out of 182 with its mining index included in the International Council on Mining and Metals’ report on “Role of mining in national economies” [1]. The index shows that many of the world’s mining countries go on relying on their natural resources as a major driver of economic development.

Environmental damage and health issues arising from mining should always be taken into account. Currently, the Ministry of Health cooperates with the World Health Organization, to receive methodological support for conducting research into the possible environmental spill out from mining in Armenia. According to the data of the Armenian National Institute of Health report on “Health System Performance Assessment, 2018”, malignant tumors, which were the second leading cause of death in 2017, increased by about 20% within the group of non-infectious diseases in the five years preceding 2018 [2]. The first cause for death are circulatory system diseases. Compared to the preceding years, the number of patients with malignant tumors diagnosed for the first time in life at oncological establishments as well as the number of patients under dispensary control at the end of the year had also increased. Though, it’s difficult to link mining as the main reason for the above mentioned trends but it has raised suspicion about the after effects of mining.

Currently there are about 871 mines with useful minerals, as well as 580 different metal ore’s  and more than 130 different types of useful minerals (about 25 of which are metallic) recorded. There are 21 tailing ponds of waste accumulation from the exploitation of the minerals. There 27 metal ore mining companies in the country, for the operation of which there are 28 permits [3].

B etween 2014-2018, the flow of Foreign Direct Investments in the field of mining was $365 mil. or just 30% of the total FDI. The geographical distribution is as follows: Russia, the United Kingdom, Jersey (Channel Islands), Cyprus, the British Virgin Islands. Between 2017-2018, the flow of both total investments and FDIs have been reduced.

Mining industry encourages activity outside of Yerevan and promotes decentralization of proportionate development. According to the Extractive Industries Transparency Initiative (EITI) report for 2016-2017, metal mining has provided accordingly 6.2% and 5.6% employment between 2016-2017. Only 3.6% and 3.9% of the employed staff in this sector was in Yerevan, while the majority of the employees, about 90%, were in outlying regions of Armenia such as Syuniq (70%) and Lori (18%) between 2016-2017. In 2017, the average salary in this field was 295,257 AMD, which was by 29.7% more compared to the 2016. In 2018, the average salary for the organizations having 1 or more employees was 644,226 AMD, and for those having 50 or more the salary was 711,720 AMD. Between 2016-2017, the mining industry provided 19% and 17% of formal jobs in the Syuniq region providing about 5600 employee opportunities for both years. Thereby, Syuniq and Lori regions’ shares in the industrial production amounts to 16.5% and 8.9% respectively with the share of Yerevan at 40.8%. Mining contributes to the balance in regional development though consequently it raises many problems.

Impact on the environment

I n 2018, 72% of revenues within the state budget are taxes paid by a 1000 taxpayers, where 10% of taxes paid has fallen to the major mining companies [4]. Besides the main taxes, the mining companies also pay royalties, environmental payments, as well as pay taxes to local budgets.

The distribution of environmental taxes are for emitting hazardous substances into the environment (into air and water basin), disposal of production waste into landfills, production and consumption of products that can cause damage to the environment. Ararat occupies the leading place with 37.6% for having the most environmental effects than it is followed by the regions of Vayots Dzor, Kotayq and Yerevan. In 2018, these taxes decreased by 18% in Syuniq and by 2.5 times in Lori compared to 2017 with environmental charges increasing in both regions [5].

Many of these payments are for water use, exhausting reserves of non-metallic minerals, underground fresh and mineral waters and reserves of extracted salt and for use of bio resources. We can see on the Statistical Committee’s data [6], that according to the emissions of hazardous substances into the atmosphere, the mobile sources have the highest share of atmosphere emissions which rakes in at more than 50%, next are the electricity production emissions, as well as emissions caused by electricity and water supply.


The export volume of minerals also decreased as a result of the decline in copper extraction, which was due to the creation around the “Vallex Group” companies. This stopped the work of the Teghout mining and enrichment plant. This was because of the non-compliance with the Armenian and international standards of tailing dam’s environmental indicators and the stopping of work at the Copper-Molybdenum Combine of Alaverdi. All these affected the extraction, export volumes and taxes being paid. Hence, in 2018, the volumes of copper concentrate extraction reduced by 26% compared to 2017. The average price for one ton of exported copper was about $2000 in 2017, and was $1237 in 2018. The physical volumes of extracted copper have increased by about 3 times for the last 5 years, as a result of which Armenia’s economic dependence on external factors, such as international copper prices and behavior of major consumers, has increased. In 2018 the extraction volume of products made from copper also reduced by 31% in quantitative terms and by 13% in terms of value compared to the 2017 results.

Summing up the above mentioned results, we can note that although the share of mining within the GDP is small, it has a significant share within the export structure, which in turn ensures foreign currency offer.

In order to understand the approximate statistics of domestic consumption, the volumes of copper concentrate production and extraction have been singled out as an example. In 2018, 317.4 thousand tons of copper concentrate was produced and 424, 825 tons was extracted. In 2018, copper wasn’t imported to Armenia. Studying the statistics of the last 8 years, it turns out that the produced copper is only exported. And here arises the necessity to develop the opportunities of recycling and using raw materials. 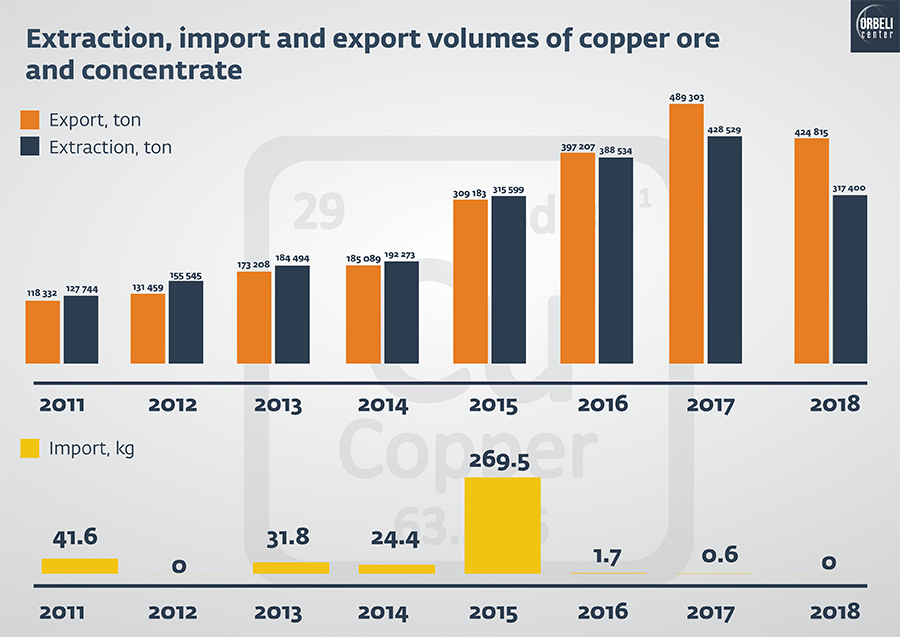 Still in 2017, the World Bank presented a report on the mining industry, where the economic growth prospects in this area and the necessity for the development of national mining policy are singled out. In the RA Government program, the development of strategy and relevant legislative regulations are one of the steps to ensure sustainable development of the mining industry. Among the steps taken to regulate the field and to make it transparent was the membership to the Extractive Industries Transparency Initiative (EITI) in 2017. Running a transparent and responsible activity is related to the investment field’s of improvement. Moreover, on the one hand there are projects, related to the field’s regulation, which refer to the suspension of issuance of new mining licenses for metallic minerals’ extraction until 2021. While on the other hand, the Ministry of Health cooperates with the World Health Organization, for studying the influence of environment on human health. So the steps towards strategy development of the field have already been taken. The mining strategy should be directed to improvements in the legislative and legal field which in turn will minimize risks involved.