The Armenian Thematic in the Research of the Turkish Analytical Centers

O ver the last decade, the constantly growing number of analytical centers that contributed to the development of humanistic scientific thought beyond academic frameworks have given a new quality to political-strategic developments. The analytical centers study almost all the public-political spheres, presenting various suggestions and ideas. Turkey is not an exception, where dozens of scientific-research centers and expertise groups work in different spheres, Armenia included. We have observed 7 Turkish analytical centers affiliated with various typological and ideological flows, which published 72 articles on Armenian themes in 2016-2018 (Table 1).

Published sources of 2016-2018 according to thematic areas 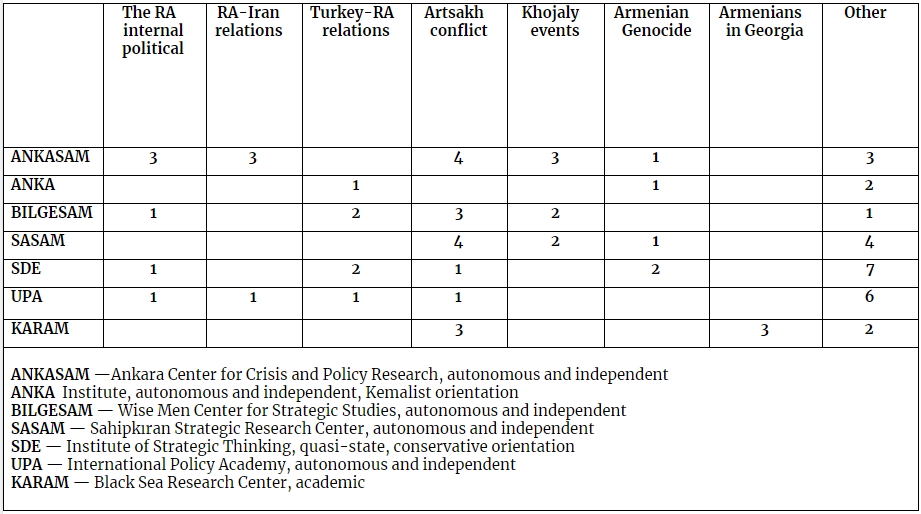 It is noteworthy, that unlike the centers “specialized in Armenian issues”, research about the RA and Armenians are mostly periodic [1], the centers in the above mentioned table do not have separate sections for Armenian research, and the articles are either occasional or situational. Here research is mainly carried out by the experts on regional issues.  Moreover, the emphasis is mostly placed on the political Armenian-Iranian, Armenian-Russian and other regional issues .

Most of the articles refer to the RA domestic and foreign policy, to the Turkey-Armenia relations and to Artsakh conflict. The last two issues are observed within the context of regional security and Turkey’s bilateral and multilateral relations with other countries, such as Russia-Turkey,Turkey-Azerbaijan, Azerbaijan-Belarus, Turkey-Iran-Azerbaijan. Historical studies referring to the Armenian Genocide are rarely met, where the issue is mainly observed from the denial perspective.

It appears that the above-mentioned analytical centers react retrospectively to the events taking place in Armenia's social and political life. For example, the April war [2], or the “Velvet revolution” in Armenia and the subsequent inner-political developments [3] were observed weeks and months later.

It should be noted that people cooperating with this analytical centers and involved in their activities are the experts invited from Azerbaijan and Middle-Asian Turkic speaking countries, particularly political scientists and international experts, who have authored articles on Nagorno-Karabakh conflict, Khojalu events [4] and RA Foreign Policy and Regional Security issues.

These field surveys are not limited by the above mentioned topics. Information, in general, especially the conflict with Armenia, often turn into political speculation, carrying propagandistic content and mostly covered by a negative light. For instance, the Metsamor Nuclear Power Plant is presented as a “Second Chernobyl”, which as the author states “…threatens regional security”. In addition, it is mentioned, that the radioactive wastes are buried in the territory of the Republic of Artsakh or the waters discharged by the nuclear plant merges into the River Araks. All these unsubstantiated claims are mainly based on the Azerbaijani and Turkish propaganda. Moreover, it should be stated, that Turkish authors steadily follow Ankara’s position, they have appealed to the International Atomic Energy Agency to close the ANPP [5]. It is obvious, that the overall theme is not only for domestic consumption but is also addressed for foreign audiences with a larger goal of trying to link these propaganda elements with the environment and to issues relating to the Republic of Artsakh. 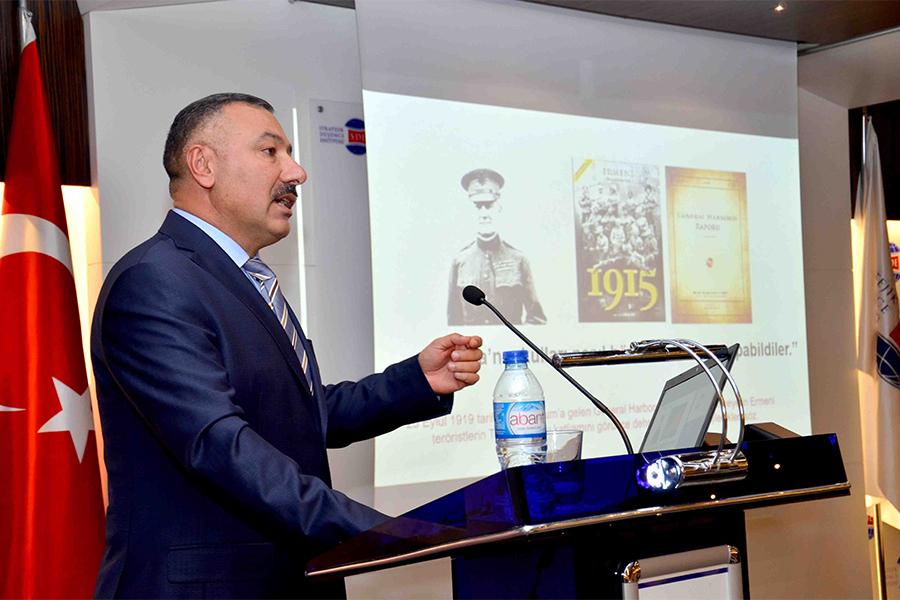 Another so-called “concern” for Turkey is the Armenians in Georgia. This topic, of course, is not a new one to Turkish think tank circles and it has become material for analytical discussions. Samtskhe–Javakheti and the Armenians living there are on the anti-Armenian informational-propaganda target. Emphasizing the geopolitical significance of the region, the authors try to present Samtske-Javakheti’s Armenian population as Georgia’s “fifth column”, a “threatening” and “separatist” element for its territorial integrity. The basic “idea” is that the territory can further turn into the “Second Karabakh”. Due to this propagandistic thesis, Turkish experts try to influence on Georgia’s public opinion.

Although the centers are presented as impartial research institutes, conducting scientific-analytical research, they try to occupy the leading position in Turkish expertise sphere, which contribute the great majority of publications on Armenians on bogus claims and weak researched analysis. Work is primarily based on enriching the information field with their own content․ Besides Turkish and Armenian publications, over the recent years analytical centers have been presenting their materials in Russian, Arabic and French.

To sum up, we should state, that the Turkish analytical-research centers always focus on the Armenian topic, regardless of the overall lack of concern portrayed by their geopolitical viewpoint. Besides the above issues, there are also information and analytical publications on Armenian education, demographics, Armenian Diaspora and on other issues.