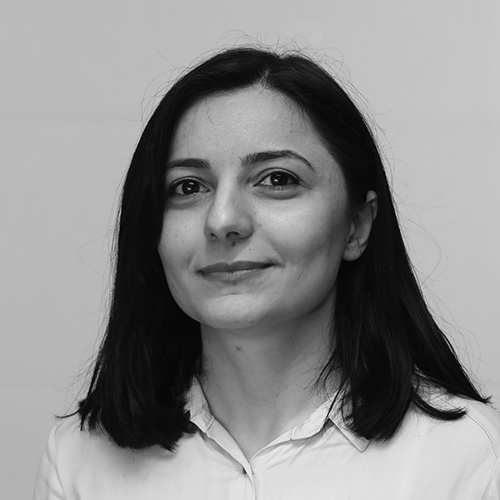 2018 according to Turkish Media Publications

Publications on Armenia and Armenian-Turkish relations in the Turkish Media in 2018 have undergone change in policy and priority. Previously, publications were based on day to day information, whereas analytical articles, assessments and formal reactions were almost not existent. Turkey’s foreign policy priorities place Armenia towards the bottom. Turkish officials have in the past touched upon Armenia by joint statements made in Azerbaijan, mostly within the context of the Nagorno-Karabakh conflict though not from a media analysis standpoint.

The picture partially changed in spring 2018 during the revolution in Armenia which caught the eye of Turkish Media. Turkish journalists visited Armenia to cover the snap parliamentary elections, Turkish researchers and experts published a number of articles in order to find out the influences the Armenian changes could have on Armenian-Turkish relations. Although there was no official statement by the Office of Turkish Foreign Affairs.

I n 2018 the dynamics of the coverage on Armenia’s revolution wasn’t presented in a balanced manner in Turkish Press. Announcements made from the evolving revolution were quite neutral at the beginning of the year, from the second half of April did Turkish media started to write about the protests in Armenia full handedly. Press Releases initially accidental referred to Serzh Sargsyan as the elected Prime Minister and it was particularly stressed that Mr. Sargsyan would reassume the governance of the country even after the 10 year rule.

Publications increased after April 22-23, and Nikol Pashinyan started to appear in the center of Turkish Press. It should be noted, that Nikol Pashinyan wasn’t well known in Turkey, and even one of the Turkish websites posted the picture of Saad Hariri instead of Pashinyan by mistake in the article publicising the Pashinyan-Putin meeting. 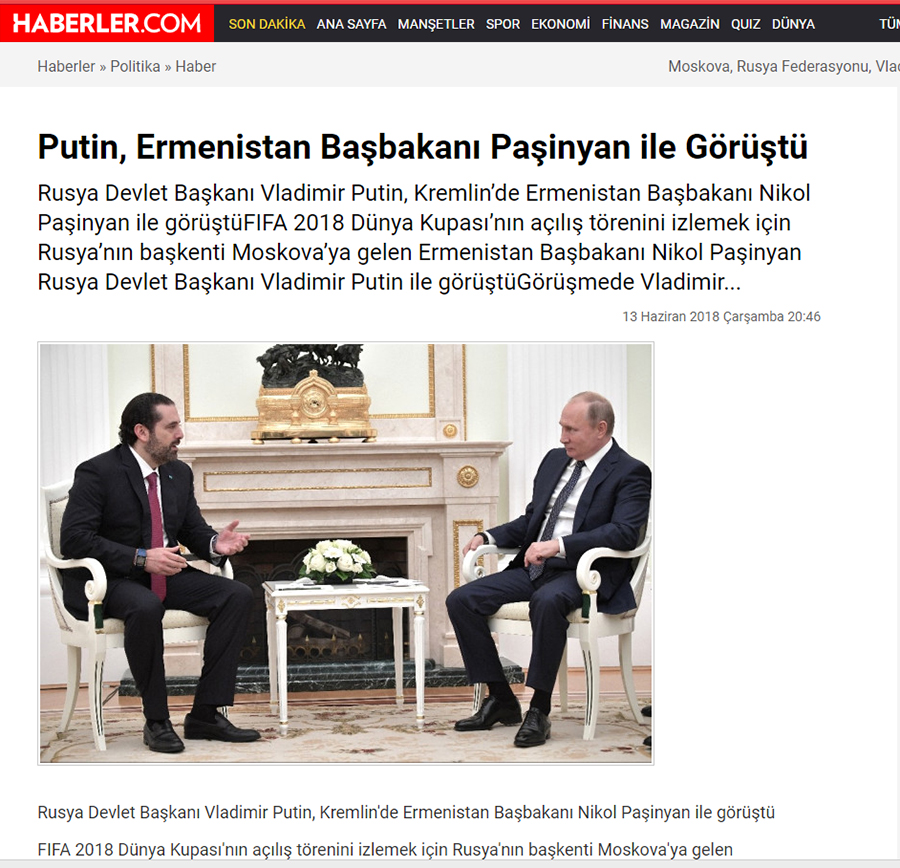 Since May Turkish Press has particularly been paying a great attention to the corruption disclosures, Robert Kocharyan’s arrest and proceedings against Yuri Khachaturov (1, 2, 3, 4, 5).

When State and Government Media were mainly publishing information about Armenia, the Liberal Media, especially Akos (1, 2, 3, 4, 5, 6, 7) and Gazete karınca (1, 2, 3), had extensive articles, and were trying to present the changes and public expectations in Armenia more comprehensively when talking to demonstrators.

During the summer months in Armenia, the nation continued to stay in the spotlight of Turkish Media, which was because of inter-Armenian events, but also because of the young man who crossed the border (1, 2, 3, 4, 5)  and  because of the cases (1, 2,) against US citizen Kevin Oksuz arrested in Armenia. Turkish Press wrote that Erdogan called Prime Minister Pashinyan to request the return of the border trespasser. Although both Armenia’s Prime Minister and the Ministry of Foreign Affairs soon denied this information, the case was however  remarkable for the fact that, for the first time after the signing of the Zurich Protocols, Turkish Press reported on the conversation between the two countries’ leaders. What refers to the Oksuz’ case, the Chief Public Prosecutor's office in Istanbul demanded his extradition from the Armenian judicial authorities.

T urkish Press Release about Armenian-Turkish relations’ and regulation can be divided into a few stages. The first being at the beginning of March, when the President of the Republic of Armenia Serge Sargsyan announced about the cancellation of the Armenian-Turkish Protocols. Although it should be noted that the Turkish side didn’t react to the President Sargsyan’s announcement in any way.  Turkish release was the same in September 2017, when S. Sargsyan stated [1] at the UN General Assembly, that Armenia is planning to cancel the Zurich Protocol. The only statement made by Armenia the Turkish Ministry of Foreign Affairs had only touched upon  in there media the announcement on Armenia’s intention to cancel the protocols regulating Armenian-Turkish relations which was created by Armenia’s Foreign Affairs Minister Eduard Nalbandyan in December 2017.

The second stage can be considered the first days of Nikol Pashinyan’s election as Prime Minister and his visit to Artsakh, where he referred to Armenian-Turkish relations while answering a journalist’s questions. Turkey’s Prime Minister Binali Yildirim’s response immediately followed Pahinyan’s statement about establishing diplomatic relations with Turkey without any preconditions: “If Armenia renounces its longstanding hostile stance towards Turkey, its borders and territorial integrity, and wants to open a new page, we will consider this and give an appropriate answer, taking into account the interests of our country. We do not want to be at odds with anyone, especially with neighbors. If such an approach is taken, we will naturally evaluate it in the interests of our country”.

The third stage begins in the end of July, when Nikol Pashinyan touched upon the same issue in his interview to “Al Jazeera” television. The Twitter post by Mustafa Sarıgül, a famous political figure and former mayor of Istanbul’s Sisli district, stood out positively in the Turkish side’s response. “Armenian Prime Minister Pashinyan has stated that they are ready to establish diplomatic relations with Turkey without any preconditions. The hand extended by Armenia should be viewed as historic opportunity in terms of diplomacy. After all, our hand is the hand of brotherly Azerbaijan”.

In summertime high-ranking Turkish government officials, such as President R. T. Erdogan (1, 2),  Minister of Foreign Affairs M.Chavushoglu, Prime Minister Yıldırım(1, 2), President of Foreign Relations Committee of the Turkish General National Assembly  V. Bozkir, President’s Spokesperson I. Kalin talked about Armenia, relations between Armenia and Turkey and about Nagorno-Karabakh conflict. Although these weren’t just answers to Armenian statements, but were simply reaffirming Turkey’s official standpoint, which has been consistent since 2009. Armenian-Turkish relations are interconnected with the Artsakh conflict and “because Armenia hasn’t left the territories of Azerbaijan”, and the problem hasn’t received a favorable solution in favor of Azerbaijan, the border will not be opened and diplomatic relations will not be established.

The fourth stage of Turkish Press Releases on Armenian-Turkish relations was based on the snap Parliamentary elections in Armenia. It was diverse in terms of publications, although most of the Media used “Anadolu” agency reports.

J ournalists who visited Armenia were expressing their impressions of the elections and of the meetings with Acting Prime Minister N. Pashinyan and Acting Minister of Foreign Affairs Z. Mnatsakanyan more than 10 days (1, 2, 3, 4, 5, 6, 7, 8, 9). In parallel, the comments by Turkish analysts, regional experts were being published (1, 2, 3, 4, 5). Analysts unanimously agreed not to expect changes in the Armenian-Turkish relations, while others also agreed that there wouldn’t be much of a big change in the issue on Turkey and Azerbaijan, as Nikol Pashinyan’s standpoint wasn’t much different from RPA and Dashnaktsutyun (1, 2).

It is noteworthy that Azerbaijani analysts have also started to become active with their journalism about Armenia(1, 2, 3), who published several articles on Armenia, Armenian-Turkish relations and the Artsakh issue in Turkish pro-governmental websites. They were certainly built around the thesis combining Armenian-Turkish relations and Artsakh’s conflict. However, as the article was written on a pro Turkish stance it again mentioned about Turkey’s promise of not establishing relations with Armenia, unless the Nagorno-Karabakh conflict was solved in favor of Azerbaijan.

It is noteworthy the article on “Pashinyan’s period in Armenia and Nagorno-Karabakh conflict” written by Cavid Veliev, researcher at the “Center for Strategic Studies of the Azerbaijan Presidency”, published by “Anadolu” agency. Veliev wrote that Turkey has no preconditions, but demands: “Results in Nagorno-Karabakh conflict, which Azerbaijan and the renouncing of territorial claims and Genocide accusations”.

The articles with such content by Turkish State Media agencies is not only an expert opinion, but an expression of state opinion of Turkey as well. In conclusion Turkey keeps it eye on Armenia and is interested in the developments in Armenia. Turkish liberal media is particularly impressed with the changes in Armenia and presents it in a positive way. Nevertheless, the regulated Armenian-Turkish relations continues to stay out of the scope of Turkish foreign policy priorities, testimony of which are the reactions of the Turkish media. The statements made by Turkish authorities, the articles of governmental media outlets and Azerbaijani analysts show, that Turkey will not give up the idea of putting forward Nagorno-Karabakh conflict solution as a precondition in the Armenian-Turkish relations’ and its lack of prioritization for the issue as a whole.

[1] Speaking at the UN General Assembly on September 20, 2017 President of Armenia Serzh Sargsyan said: “Armenia will declare those two Protocols null and void since they continuously lacked any positive progress towards their implementation. We will enter the spring of 2018 without those, as our experience has demonstrated, futile Protocols.”