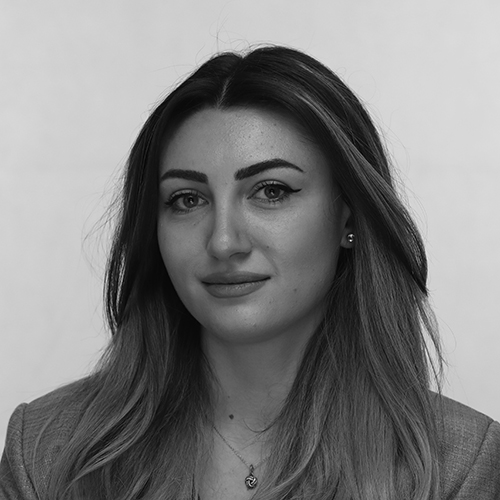 Is the use of a single currency in EEU realistic?

The possibility of introducing a single currency in the Eurasian Economic Union is often discussed. Economic integration implies the fusion of economies of member countries and the unity of economies.
Before understanding the perspectives behind the single currency policy, it is necessary to find out, the steps, of which the economic integration consists of and how realistic the implementation of a single currency in EEU is.
The stages of the integration process were classified by Professor F. Machlup from Priston University, and again later clarified by the economist B. Balassan. According to this classification, there are 5 basic forms of integration agreements.

First stage is the creation of a free trade zone, when participant countries eliminate customs barriers, but still continue to save the right to implement independent custom policies towards third world countries( May 29, 2014 Belarus, Kazakhstan and Russian Federation founded Eurasian Economic Union based on the  “Eurasian Economic Integration” declaration of November 18, 2011  . On October 10, 2014 the agreement on Armenia’s accession to the Eurasian Economic Union was signed in Minsk, and Armenia became a full member from January 2, 2015. (EEU started operating from January 1, 2015).

The second stage is the formation of a customs union which differs from the free trade zone, by the agreement of applying a single customs duty on third world countries. The Customs Union is a type of a logically complete integration agreement, which covers only trade (The EEU Customs Code entered into force on January 1, 2018).

T he third stage of integration is the formation of a common market. This is the stage in which real economic integration begins, when integrated countries agree on the goods and services and on the free movements allowed in the zone. Economic groups which have been initially formed on a political basis, are not intended to deepen its economic relations and are limited by the formation of the Customs Union. Additionally, the formation of a common market is time-consuming, as it is necessary to harmonize the normative acts related to different spheres of activities.

The Economic and Monetary Union implies a single currency investment and a single monetary policy. In the case of an economic union formation the activities of other economic life fields are coordinated: joint agricultural, industrial and other economic policies. Within the EEU, joint consolidated policy is implemented in a number of areas: tariff and non-tariff regulation, customs regulation, industrial and agricultural   subsidies, energy policy, labor migration, financial markets (banking and insurance fields, currency and stock market) and so on. At present, it is planned to launch a unified industrial policy within the EEU frameworks, the legal basis of which has been established.

The whole process of economic integration comes together when creating an economic and monetary union. The Monetary Union implies a united regional currency system, a single Central Bank and currency availability, systematic monetary and macroeconomic policy. The highest level of integration is the complete integration, when the single market is transformed into an economic and political structure, which means not only coherent economic policy, but also a united fiscal, credit, and at times tax policy and an united legislation.
Within EEU frameworks the creation of a single currency is a complicated and long-lasting process, which can be achieved gradually by preserving the succession of the aforementioned stages. Being only in the second stage of integration processes, it’s not realistic to discuss EEU currency policy. It is obvious, that the next step of integration is to create common market through the liberalization of all the factors, after which it will be only possible to talk about other components, as well as about the possibility of introducing a single currency. The issue of introducing a single currency in EEU territory is fixed in neither an EEU agreement, nor in any other document. Nevertheless, referring to the creation of economic and monetary union, it should be noted that it can have both positive and negative effects on the economies of the member countries of the union. 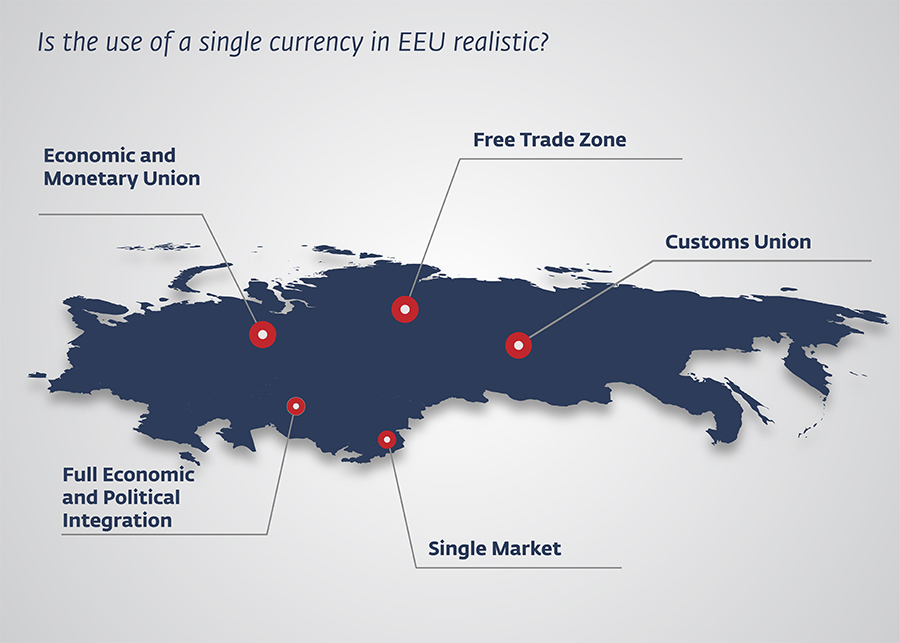 The creation of the Economic and Monetary Union leads to the following economic benefits:
The mutual fixation of currency exchange rate neutralizes the currency risks, causing free financial means, and even a minute risk decline promotes economic growth and raises competitiveness.
Through the investment of a single currency international operating costs are reduced. Within the frameworks of Economic and Monetary Union, it is possible to achieve scale effect in the financial market, which reduces financial mediation costs and transforms savings into investments.
In parallel with the unification of monetary policy, the confidence in the Central Bank of Economic and Currency Union may increase (taking into account the experience of the European Central Bank), especially if it can gain the reputation of a bank with a low inflation level in the region.

T he creation of the Economic and Monetary Union within the frameworks of EEU can lead to a number of negative effects as well:
The Central Bank of a member country loses its independence. The monetary integration requires full exchange rates and full conversion of member countries’ currency. In order to ensure conversion, it is necessary to have a single monetary and currency policy, which will be coordinated from the single center. This center may be a national body, which will control the distribution of monetary reserves. In this case, the countries will have to cover the deficit of payment balance in capital market, as they won’t have possibility to get loans.
The disproportionate development of the economy of EEU countries, as well as the absence of close economic ties (Armenia-Kyrgyzstan, Armenia-Kazakhstan, Belarus-Kyrgyzstan) are an additional obstacles for the formation of the currency zone.
In case of the Currency Union formation, decisions can be made, which will arise from the interests of major players of the integration structure, pushing backward economically weaker countries.

European Union is a good example of integration policy, with only 19 countries in Eurozone from 27 member countries. The currency zone gave an opportunity to integrate economy, ensure economic stability and growth. The investment of euro gave an opportunity to create a powerful financial system, which allows tomake businesses with minimal savings.  The high level of convertibility and lower interest rates of securities and bonds issued in national economies greatly contributed to it. On the other hand, an opportunity to get affordable and unlimited loan was created for the European companies, which played a significant role on the development of different fields. Although the single currency was a big integration step, new challenges arose such as the “Eurozone crisis”.

The economic and uniform currency management is multi-layer, includes a number of structures, and the responsibility is shared between member countries and EU. The countries decide their own policy. Till 1994, the relations between currencies in the EU countries were regulated via the European Fund for Currency Cooperation. Since 1994, this function was implemented by European Currency Institute, and since June 1, 1998 till now by the European Central Bank, which is administered by the President and National Central Bank Council.

E uropean Central Bank approves monetary policy, by ensuring price stability. ECB is also responsible for the development and the implementation of EU Economic and Monetary policy. Hence, the creation of a single currency within the frameworks of EEU is a long-lasting process, which can be achieved by gradual steps.

EU which is the only successful example of an economic and monetary union, has moved to a single currency as a result of nearly 20 years of integration processes. Despite the recorded success, the single currency policy of the Eurozone is still too sensitive to the financial-economic crisis and to the challenges of global economies.

As an actively involved country in integration processes, Armenia should try to derive maximum benefits from economic integration. Definitely, a single currency system can be invested in the EEU territory only in the case, when the levels of economies and economic structures of the EEU countries are less or more comparable. Currently, the possibility to implement mutual calculations in national currency within the EEU frameworks is more realistic. As Russia is the main trading partner of Armenia, it is economically more profitable to talk not only about the investment of the single currency, but also about trading in Russian ruble in other areas of strategic importance, which due to the flow of transfers and the trade structure with Russia, may contribute to the reduction of the transaction load and dependence on the monetary policy of the third countries.
The efficient use of the unified energy potential and the fixed basis for the optimization of interstate supplies of energy resources can contribute to the implementation of at least part of the payment operations in ruble. This observation is also up-to-date in the context expressed by Sergey Glazev, the academician in the Russian National Academy of Science and Advisor on Economic Affairs of the president of Russia. According to him, the gas price switch to the ruble is quite natural under the American and European sanction conditions. Glasev has also said that the Russian side consistently raises the issue of transactions in national currency. Therefore, the issue can be discussed as a result of high professionalism and flexible diplomatic policy.